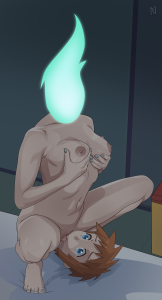 I checked out Interviews with Monster Girls recently, and was pleasantly surprised by it. I grew more attached than I was expecting to the four main girls of the show, but I especially liked Machi here. Even though most of the cast are monster girls/demi-chans, Machi’s the only one who is clearly not a normal human at first glance. As a dullahan, her head is disconnected and her neck shoots magic fire of some kind. I wanted to do the obvious thing and draw her pleasuring herself orally, but I couldn’t settle on a pose. So, I drew three variations of the same idea, and I think I’ll try to ink and color all of them (though we’ll see). This is the first one, for now.