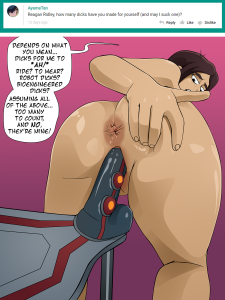 Edit: So I later found out that this Ask is actually meant to reference a scene in the first episode where she shouts, “Suck my dick!” I do vaguely remember this scene, but I didn’t ascribe any particular importance or weight to it, as it’s just a thing people say. I’m perfectly happy with her answer here, as I think understanding the question probably would’ve made me less likely to pick it for a response.