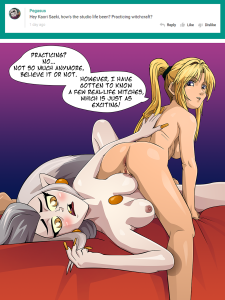 I was happy to see an Ask for the other of the two Bible Black ladies in the Studio. I did consider using her New Testament design, since I prefer it, but I felt like I had to go with her original look since that’s how I drew her before. I wasn’t really feeling the idea of showing Kaori doing more witchcraft in the Studio… I kinda feel like she wouldn’t feel the need to as much as she did in the anime. However, I did like the idea of her partnering up with one of the witch characters we’ve got lying around. There were many fine options, but I knew if Kaori went looking for a witch to help her with her Ask, Eda would basically throw herself at her to get the spot. So here we are, a Disney television cartoon crossing over with probably the most prolific hentai.