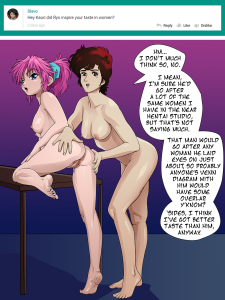 I don’t actually know how much Kaori and Ryo’s tastes would overlap. Pretty much every episode of City Hunter has Ryo obsessing over some new beautiful woman tied to that episode’s case, but I think the only consistent element to these women is that they’re all conventionally attractive. I thought pairing Kaori with a new girl in the Studio would be fun, though, and I kind of just leaned into how I felt she’d feel about the comparison, rather than analyzing any actual similarities. I went with Machi, since I haven’t drawn her for a bit and I felt she’d be a nice fit (also there’s probably some kind of pun in the names of their respective properties). Kaori’s had a pretty good spread of female partners in Asks so far, though I would like to draw her with some of the ladies from her own show eventually (Saeko in particular).