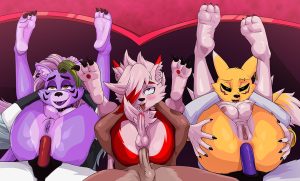 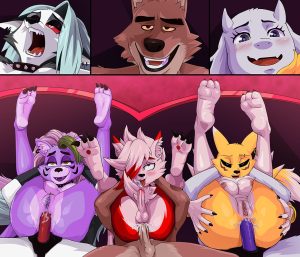 This is one of several Master Tier commissions I’m going to be doing. Most of that tier has their rewards come due in July or August. This one is bigger than I’d usually accept, but a couple of factors lead to me making some exceptions. This Subscriber had a very simple commission last year, one other Subscribers teased them about and I worried they regretted. So, with some extra payments (and a few miscommunications) we ended up here. The three main characters here are the commissioner’s OC versions of Roxanne Wolf, Lycanroc and Renamon. They told me the narrative around them, but I don’t really want to retell it all here. Essentially they’re a polycule rock band, though. The three characters fucking them, Loona, Wolf and Toriel, are just three characters this Subscriber wanted in the Studio. The ladies are using some sort of cum-loaded strapon to facilitate the creampies.