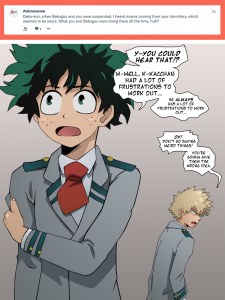 Here’s another question aimed at Deku-kun. I feel like this question was asked in the hopes of seeing a certain thing, but the way it was phrased and the way I approach these asks I couldn’t think of a way to deliver that (part of the problem was that it was referring to an event in the past, rather than something Deku could demonstrate like in his other Ask). Instead this is the most in-character response I could think of, and I hope it’ll be satisfying enough. Perhaps like with Mace and Jackie’s first Ask, it’ll lead to something more later on down the line.