By Nearphotison on Saturday, November 4, 2017 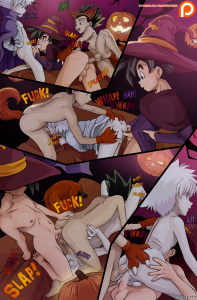 Here is the One-Shot comic page from October. At the time that it went up on there it was very timely, but of course the One-Shots get released publicly a month after the fact, so it’s a bit late for Halloween now. I think the picture’s still cute, though, and hopefully you guys can enjoy it even if it’s no longer the spookiest time of the year.