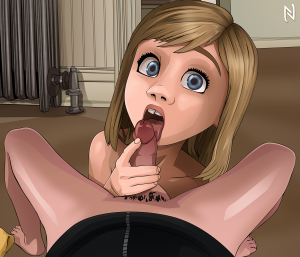 So I know there’s gonna be at least a few of you who saw the title of this pic and assumed it was new Boondocks porn, and to y’all I apologize. I haven’t drawn Riley Andersen since Sleepover Raid wrapped up, and I decided to change that. When I first saw Inside Out I had figured I’d be drawing Riley a fair amount. I really like her design, and her being just a normal girl would make it easy to plug her into all sort of situations. That didn’t happen for whatever reason, but the other day I found myself really drawn to the idea of doing more with 3D lolis from films and television. I’m not sure how long that urge will last, or how much it’ll change my output for the time being, but if you do see more Dreamworks/Pixar/etc. girls showing up around here in the coming weeks, that’s why. For this pic I’d originally planned on it just being any old dick she was licking, but then I decided to add in the bottom of a jacket to help imply it’s Jordan, the boy she meets at the end of the film and goes on a date with in the short film that came with the home release.
I can’t say for sure when Riley will show up again in my own work, but I do 100% intend to bring her into the MomSwap series eventually. I wouldn’t be opposed to doing a few more simple pics like this with her in the future, though.