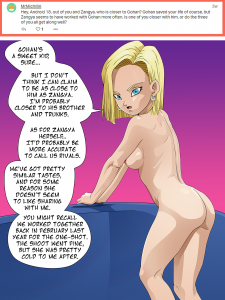 So, this is a case of me selecting an Ask for reasons other than having a good or fun answer. Android 18 is a character I feel like I should’ve drawn more of by now (in a similar boat to Videl), and after all this time this is her first Ask! Also, I feel like it’s time for a female-focused pic after a few male ones in a row. I realize the “fun” answer here would’ve been to have her be like, “Oh, yeah! We get along great!” while drawing them all three together, it’s just… that didn’t feel right. Her answer here is what came the most naturally, and while I don’t think 18 and Zangya hate each other, it makes sense to me they might have a bit of a rivalry. Zangya filled a few 18-ish roles in her movie, and if you were to draw a comparison between Bojack Unbound and the Cell Saga (and I think I’ve mentioned before, I believe the older movies for the most part parallel directly to story arcs in the main series) Zangya would take 18’s spot in the story. To me, this feels like a case where maybe they just have too much in common to be friends, if that makes sense. Sometimes, the people who remind you the most of yourself just annoy you too much to get along with.
18 likes Gohan, though. Like she said, he’s a sweet kid. ^_^