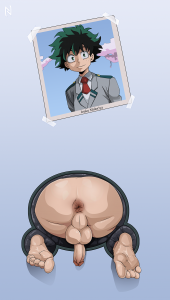 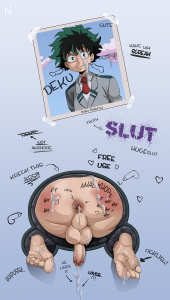 So here’s the story. I’ve been wanting to do a big project featuring several of the U.A. students from My Hero Academia for a year or two. Recently I had the idea that maybe I could do a wall with a bunch of them stuck in it like this, like maybe some clever villains had captured them and chosen this fate for them. It seemed like it’d be something a bit easier than trying to fit in the full characters in an orgy or something, and a comic would be unlikely to be finished this decade… So I was working on it, but as I was adding in characters I kept thinking of others I’d like to try. I stopped to count out a full list of students I wanted to use and it was, like… thirty or something people? I didn’t like that, since then it felt like I’d never actually finish it. But then I figured out a solution! Sort of like the old Jungle Book monkey commission, I could release the characters individually! Maybe in a few years I’ll have them all done, then I can stick them together into one big pic. Doing it this way also allows me to do two versions, a “before” and “after”. For now, it’s probably best to just think of this as a series, one I can do here and there as a simple pic when I feel like it. I won’t be doing every single student, ’cause a few of them I just don’t care to draw, but I’ll do all of them I feel like. Of course I had to do lil’ ol’ Deku first, so enjoy!