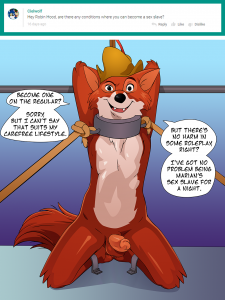 So I did my best to answer this one in a way that would still be fun, even though I feel like the question itself is kinda off-base. Robin Hood’s the archetypal free spirit hero, so the only way I could see him becoming a “sex slave” is if something very dark happened. I did think there was some potential in drawing him again, though, so instead I went in a direction that was a little cheeky. I don’t think he’d be willing to do something like this with just anyone, though, but Maid Marian’s someone he’d trust. I didn’t include her in this pic just because I know this supporter prefers yaoi, so I stripped the visual portion down to just some male BDSM.