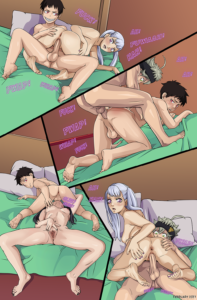 This is the One-Shot comic I did for February over on SubscribeStar, based on a script submitted by one of my subscribers. The winning script for February was a simple crossover between the main guy and gal from both Fire Force and Black Clover. I don’t watch either of these shows, but I know they both have pretty good-sized fanbases, and I hope they overlap enough for people to really be able to enjoy this. We got most of the possible pairings out of these four possible (except a couple different ones for Tamaki), but unfortunately the script didn’t make any room for a yuri pairing with Noelle and Tamaki. Regardless, this comic does mark Tamaki’s official Near Hentai debut, even if her face is a little buried under balls.