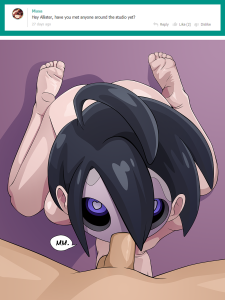 I feel like this Ask was likely looking to see Allister pair up with another character. I spent a lot of time thinking about who would be a good fit, maybe someone else connected to ghosts or the like, but I just wasn’t connecting with any of the ideas I was having. The whole time, though, I was picturing this image, which I really liked. I wanted to do this Ask, partly because I needed a yaoi one to break up the straight and yuri content I’ve been working on, but also because people seemed to really like his debut pic and I thought they might like seeing him again. So I went with my gut instinct, showing Allister connecting with someone but not necessarily making friends with another named character in the Studio.