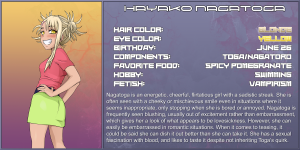 I wasn’t originally planning to do the Bios in the same order as the original releases, but since Kizuku won the poll for the first Bio I figured I might as well. So here’s Hayako, the yandere of the NHS Fusion lineup. Both of her component characters typically wear school uniforms, but I didn’t really want to dress Hayako like that since there’s no school in the Studio… So I based her outfit and colors off other clothes they’re seen in.