By Nearphotison on Saturday, November 5, 2022 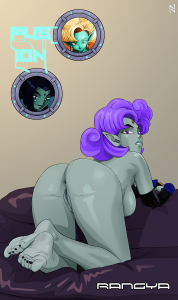 Raven and Zangya won this poll, which isn’t too surprising. They’re two of the more popular women in the Studio, with both making it into the first NHS Calendar. For this Fusion I tried working in some of Zangya’s clothing aesthetic into the jewel on her head, and thought a short version of Zangya’s hairstyle would be cute to see. I tried to make her skin a bit of a tealish version of Raven’s tone, and the hair’s purple like Raven’s but brighter like Zangya’s. I do feel like she ended up falling a little more on Zangya’s side than Raven’s, but I hope you all will like her nonetheless.