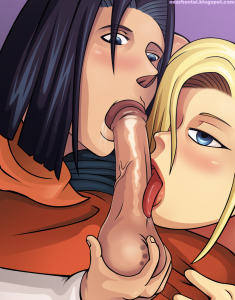 Here’s the second pic of my Bijob series. Sorry this took so long, I know a number of you were looking forward to it, but this image went through several drafts before I settled on this one. I don’t know why, but I had a hard time getting an angle I was happy with. Truth be told, I’m still not crazy about it, but it’s definitely the best of the ones I turned out.

I wanted to do one with Android #18 and her twin brother, #17 from Dragonball Z. Once I had decided on them, it seemed natural to make the receiving guy (who may not always be a character from the property, but in this case is) Krillin, #18’s husband. We don’t see much of #17 after they marry, but it’s implied in GT (for those who consider it canon) that he lived in the woods after being revived by Shenron. I suppose it’s possible that between the Cell and Buu sagas he paid his sister and her husband a visit, though I can’t say I’m terribly worried about making this picture fit into continuity. 😀

Coed Capers After Lights Out, Page 5