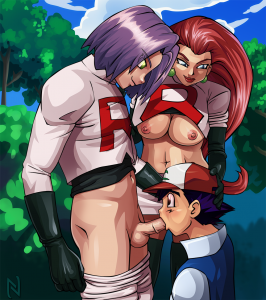 I drew the original sketch for this one back at the same time as my Trunks/17/18 picture, and you may notice it has a similar theme. Like with that picture, I tried to leave just how rapey the situation was up for debate, so the viewer can decide for themselves based on their own tastes.

I’m always worried about coloring old pictures, because I know I’ve made some improvements even in the short two months since I drew this. Still, I think it holds up fairly well, and people who are into this sort of thing should enjoy it.

I’m expecting Ash to crop up in my rotation again before too long, especially since Delia Ketchum did so well in my MILFs poll. I haven’t decided what I want to do with the two of them yet, but I think I should do at least one pic with the two of them that doesn’t involve Prof. Oak.