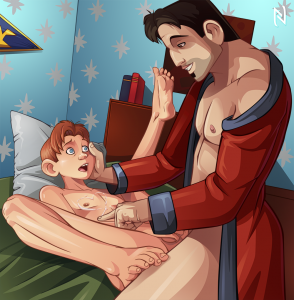 This is a commission I recently wrapped up for a new client featuring Hogarth Hughes and Dean McCoppin from The Iron Giant. I always knew I’d end up drawing Hogarth some day, but to be honest I had always assumed it would be him with his mother. While that’s still a very likely possibility at some point, I ended up liking Hogarth in this role a lot more than I thought I would, so I wouldn’t be surprised to see more pics of him like this show up on here in the future.