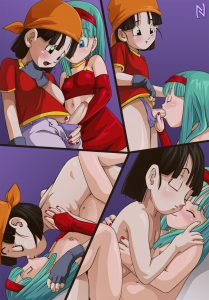 Here is a commission I’ve been working on for a while…. Even though the subject matter for this one isn’t super complex or demanding, I kept hitting weird stumbling blocks with this one and in the end it took way longer than it reasonably should have. Thankfully the client was super patient with me while I muddled my way through it, though, and once the lineart was done the coloring went by pretty quickly. I think the end result is pretty cute, and I hope you guys like it as well. ^_^

EDIT: My project “Dragon Ball F” hadn’t been fully realized when I first made this, but I think now that this comic fits better into that universe (where all male characters are female, and any character can become a futa by eating a “futa bean”) than it does any other take on Dragon Ball I’ve used. So I’m adding this to that series.