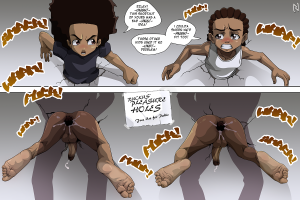 This commission is part one of two, featuring Huey and Riley getting stuck in two holes in a wall. Riley thought they could fit through them to take a shortcut, but he was wrong and now they’re getting used as cum receptacles by anyone who happens by. It seems as though Uncle Ruckus was the first to find them and break them in, and now he’s left a sign up letting everyone know they’re available. How did two holes end up in a wall like that? I’m not sure, but my theory is Ruckus himself put them there with a sledgehammer and spread the rumor that they could be used as a shortcut in the hopes two young idiots would get themselves stuck. That’s just a theory, though, as the client only told me as much info as is visible in the pic itself.