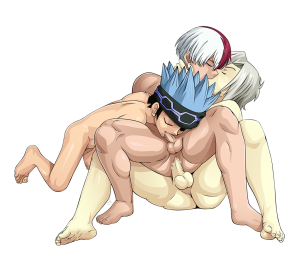 It took an embarrassingly long time, but I finally got around to wrapping up the third installment of these “orgy” commissions. For those who weren’t following me when I released the first two, this commission is three separate background-less threesomes which the client plans to piece together to create an orgy-type scene. This third one features Gokudera of Hitman Reborn, Todoroki from My Hero Academia, and Horohoro from Shaman King. This officially wraps up the “Fire Sale” commissions I sold out to raise money for a friend whose home had burned down about 500 years ago, leaving me with only exclusive commissions to worry about for the foreseeable future. ^_^