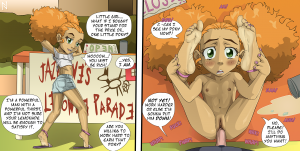 So this commission started out with the client just wanting one cute picture of Jazmine in a specific outfit, and one with her being fucked in this position. After I suggested adding some dialogue to the image, however, it began to take a bit more shape and become a fully-fledged scene.The client thought it’d be fun to work in the plot of “The Block Is Hot”, which sees an older rich man exploit Jazmine’s lemonade stand for his personal profit. The background and dialogue were worked in to fit that. This pic feels a bit darker to me than most of what I do (though I’ve certainly done worse in the past), perhaps mostly due to how bad I felt for Jazmine in the actual episode. Still, I think the pic turned out pretty good, and it’s always nice to draw some more Jazmine. She’s a real cutie I’d like to get back to more in the future.