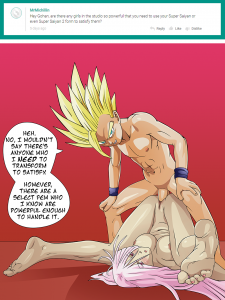 So I knew what I wanted to do for the text portion of this one right away. I think even a powerful woman’s pussy is still going to be just as sensitive as anyone else’s, so I don’t think you need to match her power to satisfy her (unless she needs rough play, I guess, but that’s not really something I picture Gohan getting that into). The real question here was who to pair him with for the demonstration. Since the question mentions the Studio, I felt it needed to be someone not from Dragon Ball, so I was looking through my list of people in the Studio for a suitable partner. I don’t know how recognizable she is, especially in this position, but I went with Guu from Haré+Guu (full title Jungle wa Itsumo Hare Notchi Guu). Guu’s a deity-level being of unknown limitations who mostly uses her power to mess with a boy she met in the jungle. She’s usually a loli, but has this adult form she takes a few times in the show. I don’t know if anyone remembers this show, and I’m sure nobody remembers me drawing her back in 2010, but I really liked the idea of bringing her back for this pic after a decade of inaction. The one downside to using her is that she’s kinda the ultimate stoic, rarely showing any expression whatsoever, so I couldn’t show how affected she was by Gohan’s SSJ2 fucking. Just know that for her, an open mouth and slight blush is basically the equivalent of a full-blown ahegao.