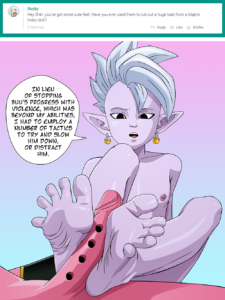 So, I actually already had a sketch of Supreme Kai giving Buu a footjob sitting in my work folder. I decided not to use it for this Ask, though, as that sketch also includes the Eastern Supreme Kai and is a bit of a follow-up to the “Plan to Defeat Majin Buu” pic I did with those three a while back. I’d kinda like that pic to be its own thing, if it ever gets finished, so I drew sort of a variant of that for this Ask. I figured people would like seeing more of Shin, and footjobs are usually pretty popular.