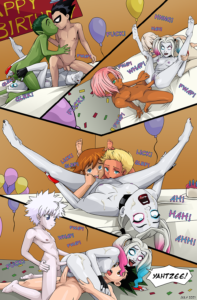 This is the One-Shot comic I did for July, a script submitted by one of my supporters on SubscribeStar. The premise described here was that Harley Quinn was hired as a birthday clown (it’s not clear whose), and ended up fucking all of the guests. Each panel pairs her with a different shota pairing the writer wanted to see her with (panel three being the only one that’s not already an established duo, just two extra boys they liked). The poses were left up to me, and I did decide to work in a little bit of yaoi, though not as much as I could have.