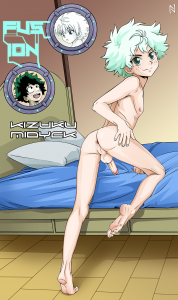 So I’ve seen other artists here and there doing fun fusion images of characters, and I wanted to do my own spin on it. I posted a poll on SubscribeStar with ten cute and popular boys from the Studio. It was close, but in the end Killua and Midoriya won out, and this is my attempt at fusing them. I know people tend to fuse the clothes, too, but I’m not as interested in that part of the process so I went full naked with him instead. His name is Kizuku Midyck (pronounced like key-zoo-koo mid-dick), and he’s a permanent member of the Near Hentai Studio now. I think of him as a little vanilla mint ice cream boy, and I hope you all will like him. I decided to make his body a bit closer to like how I drew Deku in season one, before he started beefing up, ’cause I feel like that’s a good mid-way between how I typically draw him and Killua.
I can’t promise he’ll show up again, but if he’s popular enough we might see him in Asks and the like. At any rate, we at least have this image of him. I will be doing a female fusion sometime soon, and probably more in the future. The process of watching the poll was fun, and the image itself was fun and relaxing to make.
And, for the sake of anyone interested in Studio lore, he wasn’t made with any of the fusion methods from shows like DBZ or whatever. We used original Studio technology to spit him out without losing the original source characters.
Crossover Hunter × Hunter Izuku Midoriya Killua Zoldyck Kizuku Midyck My Hero Academia NHS Fusions
6
Previous Post
Next Post