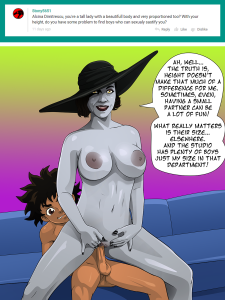 I’ve been thinking recently about trying to draw Lady Dimitrescu again, and this Ask seemed like a good opportunity to get that out of my system. There are a number of ways I could have answered this, I feel like. One would be to try and match her size a bit more, maybe with someone like Broly. Another would be to focus on, like, oral sex or something like that. I decided instead to point out how many big-dicked shotas there are in the Studio. I considered using Trunks for her partner here, which I think would’ve been cute since he’s even smaller than Corey, but I went with Corey instead for a couple reasons. One, I just wanted a bit darker of a skin tone to contrast Dimitrescu’s pale vampire pallor. Another is, if Corey likes older women, he should be really into Lady Dimitrescu. Granted she doesn’t look that old (I think she’s meant to look like a woman in her early forties), but as a vampire I think she’s fairly ancient. Also, Corey just seems to be popular since debuting him, so he gets the honors of demonstrating her point here.