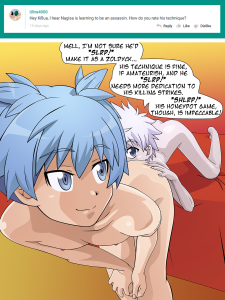 When I think about Killua and Nagisa, I feel like their experiences as assassins would be pretty incomparable. Killua grew up raised as an assassin from birth, in an assassin family, while Nagisa picked it up in high school and focused only on assassinating one difficult target. Also their worlds are just completely different, so I feel like Killua’s assessment of Nagisa would probably be pretty unfavorable. However, Nagisa’s shown to be really good at using his cute appearance and unassuming manner to get past people’s defenses, and I thought Killua eating out his ass while praising his “honeypot” skills would be fun.

Also, for anyone interested, here’s the Q&A video I did last month: