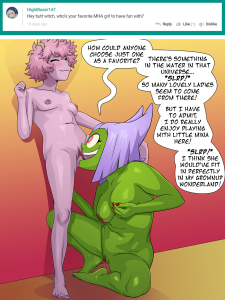 I think I probably could’ve picked any random MHA girl for Butt Witch to answer with and it would’ve made sense, so I tried to work that element into her response. However, I thought she’d like Mina, not just for being bubbly and fun, but for her inhuman appearance that B.W. can probably relate to. There’s probably going to eventually be some MHA girls in the Busy Weekend comic, but for now I just thought this Ask would be a fun and simple way to get her together with someone from that series.