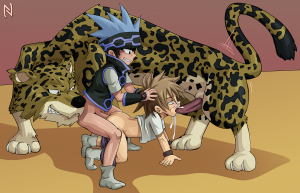 Here’s the next in a series of Shaman King commissions purchased through my “Epic Level” tier. This one sees a return of Horohoro and Mic the Jaguar, with the addition of Ludsev Munzer (Asakura Munzer Redseb in the original Japanese), a character I don’t really know. This will be the last of this series for the time being, as the client who has been commissioning them each month has switched to something else for his March reward. I may return to Shaman King on my own once I’ve had a chance to take a breather from the franchise (drawing it this much has kinda soured me on the series, though I expect that’ll pass over time), but if I do there will probably be less bestiality and socks involved.