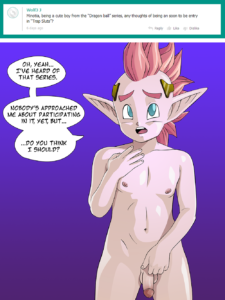 I didn’t pick this one for answering for the usual reasons. I didn’t really have an answer in mind for him to give, nor did I think it’d make sense to do much interesting with the visual component of the answer. However, in Minotia’s only other appearance so far, he barely is seen, and I thought maybe people would just want a better look at his body. On top of that, I thought this might be a good way to gauge people’s interest in the character, or in seeing him in Trap Sluts. I’ve got several Dragon Ball boys lined up for that series, but so far Minotia isn’t one of them. If there’s enough interest in him stemming from this Ask, though, that might change.