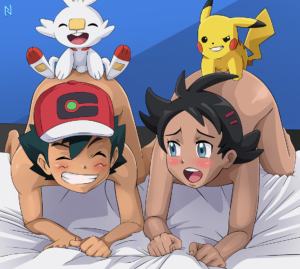 So I’ve had an idea like this for a while now. At one time this was going to be Ash and Ritchie, with Pikachu fucking Ritchie and Sparky fucking Ash. I’ve already drawn Ritchie a couple times, though, so when Pokémon Journeys introduced Goh (I’ve seen it spelled Gou, but I think Goh’s the official spelling?) and his cute Scorbunny, I decided to bring them into this concept instead. I’d been looking for an excuse to draw Goh for a bit, but had some trouble making it work until adapting him into this Pokémon swingers concept.