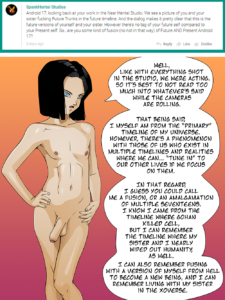 I needed a simpler Ask to answer for the moment, and I figured this one would fit that bill well. I like 17 despite not drawing him that often, so this Ask was a convenient excuse to draw him again for a quick pic, but also allow me to explain some of the, uh… Studio Lore, I guess. Gohan talked about this phenomenon a bit in his Spotlight interview, but some characters represent themselves from multiple realities. For those characters, they’re able to access memories and channel emotions form those divergent timelines, though they mostly live life as one simple “default” version of themselves.