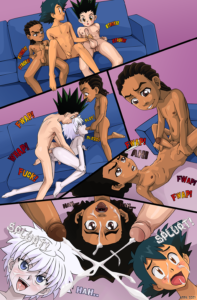 This is the One-Shot comic I did for my Subscribers in April. The concept behind this strip was basically to do a bit of a revival of The Lovers and the Brothers, but with Ash added into the mix. Rather than try and directly connect it to that narrative, though, I instead set this one in a location in the Studio (that probably looks familiar to some of you).