By Nearphotison on Saturday, September 18, 2021 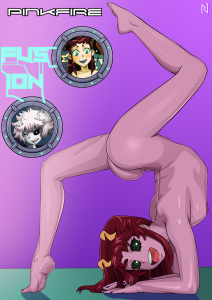 Here’s the third fusion for this series, Mina Ashido (Pinky) with Koriand’r (Starfire). The theme of the poll for this one was “colorful” girls, i.e. girls with unusual skin tones like pink or green. This combo won out, so we now get the fusion of the Alien Queen of U.A. and the Princess of Tamaran! Having two characters with unique designs allowed for a lot of interesting decisions when designing her, some of which probably aren’t that obvious, but I tried to blend some of the most recognizable aspects of both girls’ looks into Pinkfire, here. Since I couldn’t find a Tamaranean translation for the word “pink”, I opted out of giving her a non-hero name, but I think she can just go by Pinkfire and that’ll be fine.

Coed Capers After Lights Out, Page 3