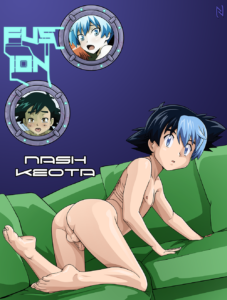 I wanted to try a fusion with a bit more dissonance between the characters, so the poll for this one featured a variety of different characters (in terms of age, species, gender, etc.). Funnily enough, the two most similar characters on the list won, which is how we got this Nagisa and Ash fusion. This does, however, mark the first NHS Fusion to not feature a My Hero Academia character. I decided to forgo Nagisa’s pigtails and Ash’s hat/cheek lines, with the hope that it’ll help Nash stand out a bit on his own.