By Nearphotison on Wednesday, November 10, 2021 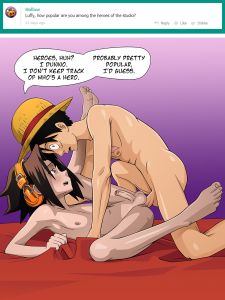 I find it a little hard to picture characters in the Studio walking around calling each other heroes, or anything like that. I think most probably don’t really know much about the franchises/worlds that other characters come from. With Goku, who we’ve seen fucking a lot of different protagonists, I feel like he finds out later that he keeps ending up with “heroes”. That being said, I have been thinking about drawing Yoh again, and this Ask seemed like a good chance to do that, while also pairing Luffy up with a protagonist that Goku hasn’t been with in a pic yet.
Of course, there’s a possibility this question is instead asking about people who are heroes of the Studio, like the top performers, but I think it’s asking about protagonists.
Character Asks Crossover Monkey D. Luffy One Piece Shaman King Yoh Asakura
3
Previous Post
Next Post

Coed Capers After Lights Out, Page 3