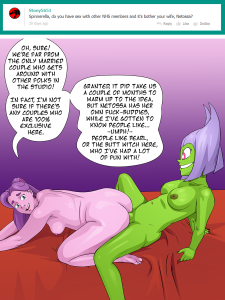 I’m not really sure if I’ve talked about it before, but I’ve had an idea somewhere in the back of my head for, gosh… probably a couple years now, of doing a threesome with the Butt Witch, Pearl from Steven Universe, and Spinnerella here. I can’t remember the exact catalyst for the idea, but it’s one of many I keep thinking I’ll eventually get to, and I hope I will. I already did a Studio Tour pic of just Butt Witch and Pearl, and one of my AI-assisted fanfics alludes to the concept at the end of it, but I saw this Ask as a good opportunity to build towards it further. Hopefully eventually I’ll get around to drawing all three of them together, and it’ll be as nice as it is in my head, but for now it’s fun to see Sinnerella take some green cock up her backside.