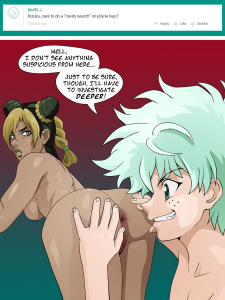 This Ask was submitted shortly after I released Kizuku’s bio, which revealed his interest in butts. I also got a number of Asks revolving around Jolyne once people realized she was in the Studio (debuted in November of 2013), specifically around the cavity search scene from the first episode of the anime. I wasn’t really able to get to the other Asks, but I thought this one might be a fun way to re-introduce Jolyne in my work, especially now that the anime’s provided a more consistent reference point for her style and color scheme. I decided to leave the actual searching up to the imagination, so exactly how he decided to probe deeper is up to you.