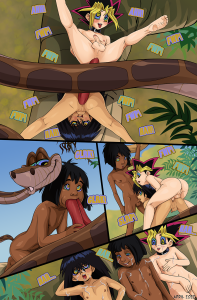 Like all of my monthly One-Shot comics, the script for this was submitted by one of my supporters on SubscribeStar. The idea for this script was to see Kaa hypnotizing a few boys. Other than Mowgli, I’m not sure why these specific boys were chosen, but here they are! Funnily enough, there is an Ask coming out in the future that I drew before this script won where I use some of these same characters, because I knew at least one of my Subscribers wanted to see Kaa hypnotize them. Due to how I release stuff this ended up going public first, but y’all will see that Ask coming up sometime in June.