By Nearphotison on Saturday, October 8, 2022 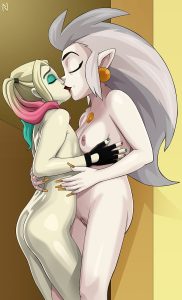 It’s not a goal of mine to pair Eda with everyone who made it into the first Calendar, but looking to the Calendar roster is a good selection of characters for me to go to for this series. In Harley’s case, I decided to go with her more recent animated series design, not just because I’ve seen the new show more recently than B:TAS, but also because I liked the idea of two pasty bitches embracing like this. Went a bit simple with the pic itself, but I like how it turned out. I don’t do simple kissing pics like this often.