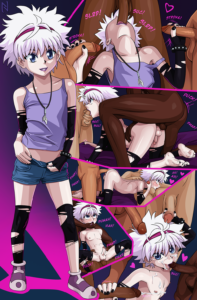 I knew from the very beginning I wanted to bring Killua into this series, it was only a matter of when. I decided now was as good a time as any, so here he is! I based his look here off a couple of different outifts he wears in the series itself, with some extra flair of my own. He ended up with a bit of a punk look, which I think compliments him well. Killua won’t be the last boy from Hunter × Hunter in this series, I’m sure. I’m hoping to eventually use both Gon and Kurapika, at the very least, somewhere down the line. For now, though, I’m going to go back to the Dragon Ball boys for the next entry. I’ve got two boys from that show who are going to make repeat appearances (due to having different designs I wanted to use), and the first of those repeats will be the next Trap Sluts pic.