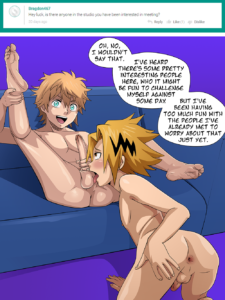 I’m not sure how to talk about this one, and I feel like I will probably not represent my thought process well. I don’t really know Luck that well, but I don’t picture him sitting around daydreaming about meeting someone in the Studio like some characters might. I know he likes to seek out powerful opponents, and that might parallel into his Studio self wanting to seek out, like… big cocks or something, but it just didn’t sit right with me. Similarly, I’ve had some Asks I’ve had to pass over trying to pair Luck up with other eclectic-powered characters based solely on their powers being related. I don’t want to do those Asks, because I feel like they’re inviting answers with a lot of electricity flying around, or some electroshock stuff that I just don’t have any interest or intention of drawing. So this is sort of a compromise between a couple of different Luck Asks I didn’t feel I could work with, in an attempt to still give people some Luck yaoi crossover action I hope they will like.