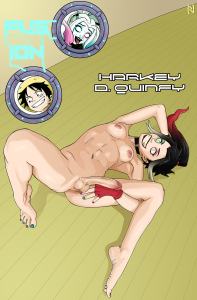 I was pretty surprised by the results of this Fusion poll, but I think these characters do kind of relate in their manic personalities. I did have trouble figuring out what elements of Luffy’s design to incorporate, since I feel like his most recognizable traits are all ones that wouldn’t come across in a Fusion the way I’ve described them up to now. His hat, his scars, are all things that were off the table. Harkey does get to have Luffy’s big cock, though, since I always said if we got a male/female fusion they’d be a futa. I do also picture Harkey going by they/them pronouns since they’re literally half male and half female (both physically and in identity).