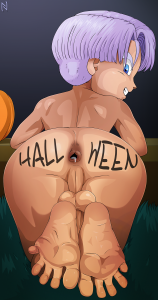 This here is a Mini Commission. The supporter who nominated this one originally had a different idea, but changed it for the month of October. I figured, hey, why not get to this one since it’s so seasonal and relevant and all. The first draft of this one cut out higher on his body, but I decided to include the shot of his feet, ’cause, well… I know some of y’all will appreciate that. Also, his asshole went from normal to well-used at the request of the person who originally nominated this idea. I guess it makes it look more like an ‘O’.