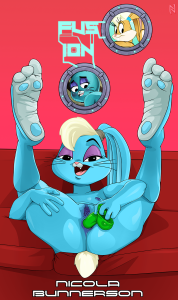 The theme for this Fusion’s poll was furry ladies, and Nicole and Lola both won out in the end. Now both of the Watterson’s I’ve drawn before have been fused, which I think is interesting. Cabbits are a bit of a thing (Ryo-Ohki from Tenchi Muyo is one, for example), so that’s the direction I tried to go with her. I tried to stick with the less-stylized approach I used for Nicole’s previous appearance, while working in some of her facial features but giving her Lola’s hair and ears. I hope you all like this blue cabbit girl!