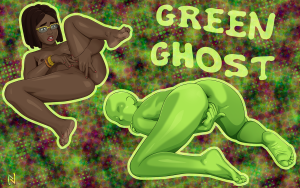 Invincible’s a show with a lot of attractive people in it, especially on the feminine side of things. When I first watched it I thought about drawing a number of characters, but for whatever reason never did. The one who stuck in my mind the most is actually barely in the show, Green Ghost. I’m not sure what it is about her that I latched on to, but I kept thinking about her months after watching the first season. I decided to do a simple little pic of her both in and out of her superhero transformation, and maybe this will be the ice breaker I need to come back and do some more Invincible stuff later. We’ll see.